The newly enacted law for the tourism industry is expected to attract international operators to expand their operations in Bangladesh and increase the number of tourists here, experts and stakeholders said.

According to them, the new legal framework would also help to build confidence and reliability among foreign entrepreneurs.

The Bangladesh Tour Operators and Tour Guides (Registration and Operation) Act 2021 would also ensure the best services for tourists and thus boost the industry.

They were also of the view that foreign tour operators would to some extent create investment potentials in the country.

They felt that a local operator should be associated with an international operator to operate in Bangladesh, but this provision is not provided for in the law. 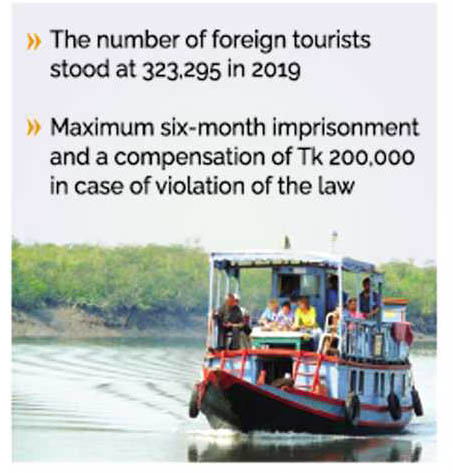 Section 4 (2) of the law allows foreign tour operators to do business in Bangladesh with the permission of the relevant competent authorities. Registration is compulsory for tour operators, in accordance with the law.

The new law makes it compulsory to obtain authorizations from the authorities concerned for local businesses.

It also provides for a maximum prison term of six months and compensation of Tk 200,000 for violation of the law.

A number of tour operators have a long history of doing business in the country without any licenses, and there are claims that they often cheat on tourists due to the lack of necessary regulations for the business.

A senior BTB official told Financial Express that a low number of foreign tourists are currently coming to Bangladesh due to the impact of the Covid pandemic.

He hopes that the number of foreign tourists will increase in the coming days.

BTB CEO Jabed Ahmed said the new law, when it comes into force, would certainly boost confidence among foreign tourists, and local tour operators would also be subject to standard regulations.

Foreign tourists would feel and believe that they would not be exploited because there is a legal framework in the country, he said.

Mr Jabed, an additional secretary, also said local operators did not have to worry about section 4 (2) of the new law as it would help them to level up and compete.

If a foreign tour operator came to operate in the country, it would be thoroughly vetted.

The government must be very quick to formulate the rules for the new law and ensure its swift implementation, added the CEO of BTB.

Dr Santus Kumar Deb, associate professor and chairman of the Department of Tourism and Hotel Management at Dhaka University, said the new law would permanently place operators under a legal identity and regulate them.

Calling the law timely and indispensable, he added that it would also increase the confidence and credibility of foreign tourists regarding their safety and security here, and encourage them to visit the country.

Calling the new law a good and positive sign – inspiring the arrival of a good number of foreign tourists here, he also stressed that the law should be relaxed for tour operators in terms of obligations.

Mr Rafeuzzaman, however, expressed doubts and concerns that foreign tour operators could hurt the business of small and medium investors, as they would come to the country as giant investors and create an atmosphere of competition.

Foreign investors should invest in infrastructure development here according to government demand and expectations, he said.

While questioning his reaction to the new law, the TOAB chairman said he was reluctant to comment at this time.

Mohammed Shahed Ullah, media and publication director at TOAB, said some foreign operators, who still operate unauthorized in the country, would come under the law, which is a positive sign.

The law would certainly be able to change the whole industry in a disciplined way and help build the confidence and trustworthiness of tourists, he added.