Companies that do business with Russia are struggling due to sanctions imposed on the country by nations around the world for its invasion of Ukraine.

The sanctions – imposed by the US, UK, EU, Australia, Canada and Japan – have what is known as extraterritorial effect, meaning the restrictions extend across- beyond their own borders.

A lawyer specializing in international trade law at Minter Ellison Rudd Watts, Sarah Salmond, said New Zealand companies were already limited in how they could deal with Russia.

”There are a lot of banks that they are going to have a hard time dealing with in the future. It’s going to be very difficult now to get paid.”

She said a number of major Russian banks have been blacklisted, meaning “you just can’t do business with them”.

Companies were now prohibited from exporting items to Russia if they contributed to Russian military objectives.

“This has a direct impact on a number of New Zealand companies, who will have to rethink what they are doing with the Russian market.”

Salmond said some companies dealing with Russia would pull out of the market because trading would be too difficult.

”This is not the case for all companies as some are exposed to much more risk than others, but I certainly think there will be certain types of companies where you know that international sanctions restrict the ability to deal with the Russian market and are likely to do so for the foreseeable future and therefore best left alone.”

Retaliatory sanctions from Russia were very likely to be imposed, as happened previously in response to Western sanctions imposed after the annexation of Crimea in 2014.

“There is every reason to believe that Russia will impose more import bans if it feels aggrieved by Western sanctions.”

Business NZ advises companies trading with Russia to ensure they are not in breach of international sanctions imposed on the country.

New Zealand exports about $270 million worth of goods to Russia, with imports totaling about $150 million.

“I think it’s really important that they reach out to their counterparts in Russia to make sure they can continue to do business legally and don’t violate any sanctions, because that’s just as important.”

He said the biggest impact on New Zealand businesses would be the increase in the price of global commodities, such as oil.

”This will have a more direct impact on prices at the pump, in an already difficult period.”

He said Russia was not a major trading partner with New Zealand.

“I think if Russia behaves in this way, then from a reputational point of view it becomes really difficult for New Zealand companies to do business in this way.” 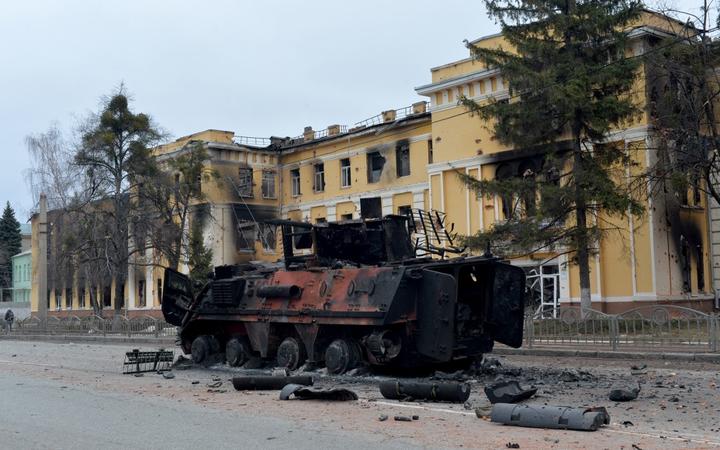 A Ukrainian armored personnel carrier that was destroyed in the city of Kharkiv. Russia’s actions on Ukraine make it difficult to justify doing business with it, a business leader has said.
Photo: AFP or licensors

Professor of international affairs at the University of Otago, Robert Patman, thought the sanctions would hurt Russia significantly and quite quickly, but they would also have global implications.

“We are already seeing a spike in oil prices because Russia is a major exporter of oil and gas and we are seeing an increase in the world price of wheat, and the sanctions will have effects that go beyond Russia” .

Patman said Russia has great confidence in China to help it cushion any sanctions.

”I don’t think Russia should put all its eggs in China’s basket, but at the moment they are out of options and [Russia’s President] Sir [Vladimir] Putin has created an international crisis and will now have to deal with the consequences.”