The gap in trade in goods and services widened 22.3% to $109.8 billion, the Commerce Department said.

The U.S. trade deficit widened to a record in March, reflecting an increase in imports as businesses relied on foreign producers to meet strong domestic demand.

The gap in trade in goods and services widened 22.3% to $109.8 billion, Commerce Department data showed on Wednesday. The median estimate from a Bloomberg survey of economists called for a deficit of $107.1 billion. Figures are not adjusted for inflation. 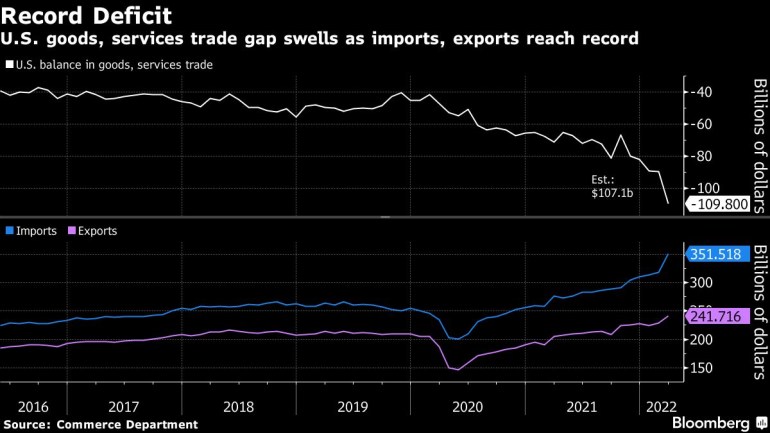 In the first quarter, the widening trade deficit largely explains the economy’s worst performance since the pandemic recovery, with gross domestic product contracting at an annual rate of 1.4%. Indeed, the value of products that American businesses and consumers have purchased abroad has exceeded purchases of American goods and services by other economies.

An improvement in the trade deficit anytime soon will be difficult as US demand outstrips economic activity in many other countries. Severe lockdowns in China to curb the spread of Covid-19 further complicate the business picture. Activity at some ports has slowed sharply, further straining already fragile global supply chains.

U.S. merchandise imports rose 12% to a record $298.8 billion, reflecting an increase in the value of industrial supplies that include petroleum. Energy prices recovered in the month following Russia’s invasion of Ukraine. Imports of consumer goods, capital goods and automobiles also increased.

On an inflation-adjusted basis, the merchandise trade deficit in March widened 18.9% to a record $137.8 billion.

–With help from Chris Middleton.